Justin Verno – OK, we’re back and have some rumors to talk about! But before we do, there are two things I want to throw out here first:

1-Congratulations to Ben Cherington and his staff on a tremendous draft.  In a way this directly relates to what you and I do here, Joe. The idea of trades is to fill the system with high end talent, and same goes with the draft. BC and his scouts did a fabulous job in giving their development team the high end talent that will hopefully get this organization a World Series. To work with  A team’s  Minor League system is and always will be the lifeline of any baseball organization. There’s a ton of work left to do, I get that. But this is as exciting a draft as we  will see in a lifetime and has a chance to be special, hats off!

2-In the last article we mentioned the Mets as having a confirmed interest in Adam Frazier, but we decided to not build a package and I’ve been asked by a few people–friends, Twitter accounts, Facebook and more–why not and what it could look like. I won’t get too winded here, Joe, but I figure what the heck? That’s what we’ve been doing, so I put this together real quick, and with the Mets taking Rocker in the MLB Draft, it helps.-

A quick look at their MiLB system shows this would not be an easy pill to swallow.  So much so that we didn’t delve into it.  I almost wonder if the Mets would be better off using Matt Allan 50 FV or even, dare I say Kumar Rocker, also a 50 FV player and sending less prospects? It’s possible, I suppose, but still unlikely and problematic to their system.

Joe Boyd – Really enjoyed how Cherington handled the draft.  We don’t know yet, but can assume that Davis was underslot and the team was able to spend those savings along with the largest bonus pool to select highly valuable prospects that have signability issues.  Instead of getting the absolute top talent, they were able to add 4 potential first rounders.  It was really impressive and exciting.  I did a piece for ITBB a few weeks back as a 1:1 primer utilizing Sim Scores. If you don’t want to re-read that primer, just know a sim score in the 2.00-5.00 range is solid, and lower the better. I just wanted to quickly touch on those top 4 selections to see who would be the closest comps for them:

Bear with me on this one, because Solometo is a unicorn. There are exactly 0 prospect reports that fall below the 5.00 threshold for Solometo.  I think there is some talk about his unique delivery, but it’s also difficult to find a 60-grade slider amongst the prospects available. In this comparison, Mize has a better fastball potential (55-grade vs 50 grade) and better command (60-grade vs. 55-grade) but they both have that 60-grade slider. Oh, and this is the 2021 version of Mize, so he is 6 years older than Solometo. I’m not saying this is the trajectory, of course. I just wanted to point out a relatively noteworthy comp for Solometo.

Lonnie White, Jr.: Kyler Murray – 2018 (3.11 Sim Score) – This one feels like it fits, no? Both are two sport athletes that just ooze that natural ability. They both have average to below average hit tools, but we could hope/expect that to develop once they focus entirely on baseball. I love the idea of adding athletes to the system and especially ones that could roam centerfield. However, if he shows up in Happy Valley next season, this Penn State Alum won’t be that upset!

Bubba Chandler: Tahnaj Thomas – 2018 (2.62) /Simeon Woods-Richardson – 2019 (2.97) – I’m going to end with two here because they are both exciting prospects. Chandler comps to Thomas and SWR prior to their breakouts, Thomas as a 40-FV and SWR as a 45+. However, both have developed into top 100 prospects and 50-FVs ($21.0M) on Fangraphs and based on the evaluation, Chandler looks to have the tools and potential to make a similar jump.

All in all, Cherington took this draft to the next level by adding all of these high upside guys. It must be said, player development is obviously essential, but adding the talent to the farm is the necessary first step.

JV – The work for the Pirates organization has literally just begun here, but I for one am enjoying the hell out of this moment and I hope the fan base is as well. Now to the job at hand… rumors!

JB – Justin, I wanted to take a second to look at what Pittsburgh may leave on the table if they do not make trades.  Let’s say nothing else changes in our projected values for these players, but the Pirates decide, for whatever reason, to hold on to the likely trade candidates.  There is some sentiment around Pirates Twitter that there might be a better market in the offseason for the controllable assets.  That may be true in terms of suitors, the Pirates trade chips hold significant value to those playoff contenders.  For simplicity, I’m going to just discuss the top three: Anderson, Frazier, and RichRod.

Let’s start with the easy one, the rental.  If the Pirates did not receive a single call for Anderson, we’re looking at a loss of $4.7M in value that could be added to the system.  That’s simply his current Surplus Value because, well he doesn’t have any value next year due to free agency.
Adam Frazier becomes a rental.  So for Surplus Value, we’ll utilize the same projection of WAR for 2022 from our previous article and we will subtract just his estimated arb from next year. So that would look like this: 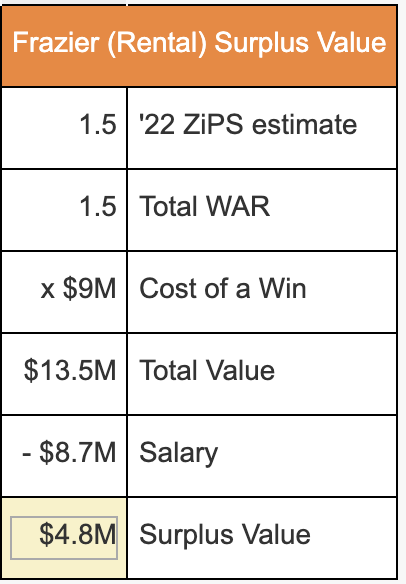 That’s a drop in value of nearly $12M.  One could likely argue that his ZiPS estimate should rise based on his performance this season, but I am trying to illustrate things here where only one factor (control) is changed.
Rodriguez is the last piece and he is most controllable.  I am going to utilize the “updated” estimates for his future projections so we are on the same page.  RichRod’s requires a bit more estimation, but his ‘22 and ‘23 salaries would simply be the $12.4M estimate from our article but with the 2021 $1.70M removed from that amount.  So the offseason estimate for Rodriguez looks as follows: 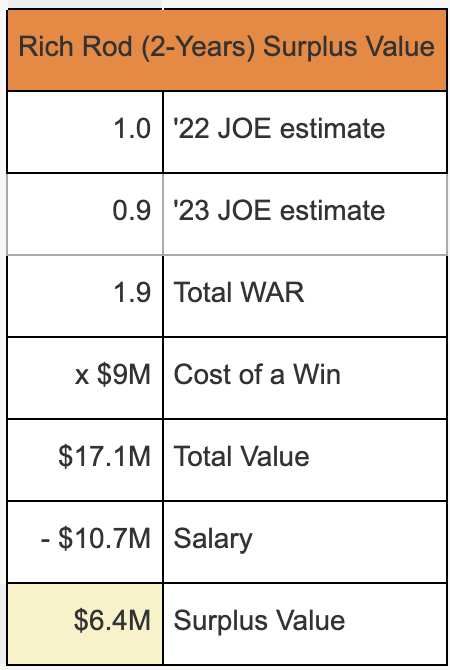 That’s a drop in value of $8.2M in value that could be added to the Pirates system.  An argument could be made that Rich Rod could simply be dealt next season after showing a bit of a track record, but he will be 32 at that time.

This is just for illustrative purposes, but holding on to these trade pieces may increase the pool of potential suitors, but also limits the value of the players.  If Pittsburgh were to hold on to all three players, they would forfeit the opportunity to add roughly $24.8M in value to the farm system.  That’s just too much potential future return to leave on the table for Cherington.

JV – Kenny Rogers said it best when he said, “you gotta know when to hold ‘em, know when to fold ‘em.” Are there players that a team can be better served to wait until the Winter Meetings? Sure, typically the long term control players that could be true, and I’m referring to three years of control guys. But, a good GM has to know the opportune time to make the move. And unless Cherington gets low-balled here, I don’t think he lets this trade deadline expire without making a few moves.

With so many fans now emerging thinking they should extend Frazier, it makes sense to talk about the surplus they lose in not moving him now. I just don’t see him as being part of the future here. He’d be 31 at the start of the extension and likely would be moving to a utility role. This is the part where the team needs to operate as a small market model, stick to the plan, and get the desired return. The Bucs should put all their eggs in the Reynolds and Hayes extensions and keep to the plan in moving an Adam Frazier.

All in all, it’s been a slower week for trade rumors for the Bucs. The All Star break is a big part of that, as it’s usually pretty hush during the break. I did, however, expect to hear some rumor coming out of the break, but it looks like Cherigton has put the lock on the doors at 115 Federal Street because we just haven’t heard many.

That said, we finally have a rumor surrounding a Pirate that is not Adam Frazier or RichRod. Andy Martino is reporting that the Mets have interest in Tyler Anderson.

(A shout out to @KG_55VFTG for bringing this to my attention)  As of writing this on Saturday the 17th, this was the only rumor out there and that may be a good thing as there’s a lot to unpack.

First, I’d like to refer to our article on “The Rentals”  from a few weeks back. It’s not the surplus value I want to point out there, it’s the Mike Minor deal from last year. LH starters are one of the better commodities to have at any trade deadline and Mike Minor is a terrific example of that. And since writing that, Anderson has raised his ERA+ from 87 to 95. Lowered his ERA from 4.67 to 4.35 and his WAR went from .8 to 1. He’s been pretty solid. I expect Anderson to get a little more than his surplus suggests and I’d be happy to replicate that Mike Minor deal with two prospects that have a 40+ FV.

Mr. Martino goes on to add that Mets may have to get rid of a contract and indicates that JD Davis could be that guy. While I’m a Davis fan, he doesn’t make much sense for the Bucs. Control is up in 25 and frankly, the Mets could do well moving him in a separate deal. So I am putting that aside and concentrating on just Tyler Anderson, the HR King!

AN international signing, he’s raw. The hit tool needs work with a 20 grade, currently, but an FV of 50. He’s as high ceiling, low floor as it comes. He has some power, can run, and has a solid enough glove. The power he has is really interesting if that hit tool can develop.

So far, Joe and I have only built packages the Bucs could get, but this is a spot where I can see the Bucs sending a package to get a package. With interest in Adam Frazier and Tyler Anderson, it’s a natural jump to make. I won’t spend too much time on this other than to say it’s something to watch for. Could the Bucs convince the Mets to give a PTBNL? A certain someone that was drafted in the 2021 class? Dare I say, Kumar Rocker? Well, a Bucco fan can dream, right?