Justin Verno – The World Series is over and the 2021 baseball season along with it has concluded, but for us Bucco fans, the fun is just getting started as the Winter Meetings are coming, starting Sunday, December the 5th and culminating on Thursday the 9th with the Rule Five Draft. And while Joe and I agree the “sell off phase” of the rebuild is predominantly over, the Bucs moved a lot at the MLB trade deadline (I still maintain this should be a national holiday). There’s still some work they can do here, and if the trade deadline is any indicator of the kind of movement we could see, these might be exciting Winter Meetings. Joe?

Joe Boyd – Yep, my joke is always to say that the Bucco season ends on 31 July, and the offseason begins right around now.  We can discuss the myriad actions in front of Cherington and we can potentially estimate some arbitration numbers.  But the crux of our articles revolve around trades and similar transactions.  It is my understanding that Cherington believes that he’ll be busy in December, so now’s a great time to look at the landscape and see what might be out there.

JV – If you’ve taken a peek at some of the 21 trade deadline articles Joe and I put together, you have an understanding of what we are looking at here. Here’s a link to the first article we put out there and in it is an explanation of how we got these trade estimates.

Just a reminder: Joe and I didn’t invent the wheel here, we just love getting the conversation going. And as I am often reminded by Twitter, “You can’t possibly know what the Pirates are thinking.” We aren’t claiming to have inside knowledge, just looking at the value of the player they could be trading and the type of return we could see based on those values.

Joe and I have talked and settled on a list of names we feel are names to watch at the Meetings. (No, Hayes isn’t going anywhere.) Some of these guys make sense to move, some the timing is right, and a few are names that popped up over the trade deadline so we think it’s likely the names will surface again. Joe, let’s start with the least likely players to get moved and finish up with the more likely. Sound like a plan?

Why him?- Jon Heyman and Rob Biertempfel said teams made offers and the Pirates listened. 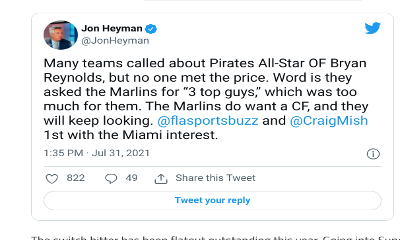 JV – A lot of people will claim this is clickbait material, and I’m not so sure  we completely disagree with that, but the Buccos appearing to have at least listened means we have to cover the possibility.

JB – I think that we’ve mentioned in our Reynolds article that the deal would have to be a Godfather offer.  In fact, we lean more towards extending Reynolds to prop open the window for contention.  If that Heyman tweet is to be taken at face value, then Cherington is doing things the proper way.  For those of you that play Fantasy Football, and your buddy wants Derrick Henry for a bench warmer… you counter with Derrick Henry for his entire starting lineup.  Of course you have a price for your top trade chip, but it has to be astronomical.

JV – Why him? There were reports that the Marlins and Bucs talked at the deadline and that Stallings is a Kim Ng target in the offseason.

JB – The next least likely (does that make sense?) to be traded is  Jacob Stallings.  We have touched on Stallings, too.  I was a proponent for moving Stallings at the time.  However, I think that that ship has sailed for a few reasons.  Most importantly, I believe the team should start to look for improvements and should see an uptick in ROI in the 2022 season.  Stallings provides stability and makes the pitching staff better.  If he were to move, you don’t have a clear replacement in the pipeline any time soon.  He will celebrate his 32nd birthday in December, and at this point, he has to have more value to the club than the return.

JV – Stallings’ value goes beyond his glove and framing. He carries a good enough bat and had no passed balls this year, but his true value is his overall work with the pitching staff-it’s like having another pitching coach behind the dish.

I’ve caught some heat talking to friends both in real life and on Twitter for this, but this is an area I disagree with Joe on. I fully get the value Stallings brings to the table and I bet there are other GM’s out there that could be willing to pay for it. Take advantage of that and put a finishing touch on your rebuild. This will require an overpay, so it won’t be an easy task and I put it 50/50 at best Cherington can get it done, so in the end I see Stallings behind the plate at PNC Park this year. (Cherington should seek a 50 FV player as a headliner to get this done.)

Why him? Ken Rosenthal reported the Bucs were listening on him and a few others, including Stratton and Rodriguez.

JB – Bednar is next, he finished the season with 1.2 WAR over 60 innings, with 11.42 K/9 he feels like a future high-leverage, back of the bullpen piece.  I will say that he is more likely to move simply due to the volatility of the bullpen.  But, he’s also a local kid and we know the fans love a local kid.

JV – Bednar is controlled through 2027 and I just can’t see the sense in moving him, Joe. But again, there were reports and those reports mentioned that his name came up and they listened. There are different kinds of “listened” when it comes to trade talks. There’s the kind of listening because a GM does his due diligence, the kind where a GM listens and puts a price on a player that makes the player “untouchable,” and then there are meat and potatoes talks. This is the one that really matters, as names are exchanged and deals are usually reached.

I think all three are represented here. I think Stallings is a guy Cherington will actively engage in. If the right package is discussed, I won’t be surprised to see him off to another city. Bednar, to me, is the due diligence talk–too much control to move. And Reynolds is the guy who’s untouchable because Cherington would need the moon and stars to move him, but I won’t be shocked if we hear his name the most in early December.

Joe, now onto the next batch?

JB – Gamel put together a nice season for the Pirates this year, and there is quite a bit of value in being a consistent outfielder for this club.  But he’s entering his final year of arbitration, so there’s obviously a price here that Cherington would be willing to authorize a deal.  Gamel can benefit the team by staying or being moved, which is a nice problem to have.

JV – An interesting candidate. One year of control, so this would make sense, to listen to Gamel. There will be plenty of OF out there in free agency, but to a team that wants a cost control player, he could be a name to watch.

JV – Fans will push back that the Buccos should wait until his value goes up. I’m just not sure that waiting will help that. Moran can play 1B, 3B and perhaps even 2B in a pinch on top of having a few innings in the OF. He is a capable starter at 1B with some pop and control, but DH is likely where he ends up at some point down the line.

JB – I’m lumping these two together for simplicity.  I’m thinking the ship has sailed for both of these former first rounders.  Both are pretty slick with the glove but just don’t have the bat to hold up.  Could you keep one of them as a versatile bench piece?  Certainly, but moving them would make more sense.  Tucker may have a bit of value, but I wouldn’t expect either to bring back anything exciting.

JV – Why Newman? His name surfaced at the deadline, to the surprise of everybody. Newman could make sense for teams for two reasons: a contender looking for a guy who can play 3B, SS and 2B, can run the bags and carries a good glove. The other thought here is a change of scene guy for a team that could take a flier on a guy with control. Side note- with his speed, I can see him adding an outfielders glove to his bag.)

JV – Why him? For two reasons. There are only two years of control with Straton; he won’t be here when they are “scheduled” to win. And his name surfaced at the deadline.

On top of that, Straton likely represents the best return out of all the relievers in the “barn.”

JB – Stratton had a pretty solid season statistically.  He has always been one of my favorites on the roster as he could be stretched out to be a fireman or pitch in high leverage situations. He has just wicked spin rates too.  He’s of value to many of the analytically inclined clubs, for sure.

JV – LH pitching is always a need, so this makes keeping an eye on these two a pair to watch. Banda could fall into this category, but here’s to guessing that the Bucs are looking to hold on as he is still a pre-arb player.

Shreve is a free agent after the ‘22 season, making this a smart bet. And if not in this offseason, I would imagine he’ll be a name to watch come the ‘22 trade deadline.

Howard has three years of arbitration left and could be an attractive, inexpensive LH for teams looking to keep the payroll down.

JB – Howard started the season pretty hot, but fell off a cliff.  Perhaps a team is willing to throw a dart at the wall and get him for a relatively low value?

JB – There is bound to be considerable churn on this roster and it should look quite different on opening day 2022.  The 40-man roster crunch will create a lot of movement this offseason and we’re going to be here to chat about it and look at the value in all of these moves (and more!).  So I’ll leave it there for Justin to take us home.

JV – These are some of the more predictable names we should hear come December. I have a feeling we could see a lot of movement in general from the Pirates at those meetings. We’ve already seen Cherington move Jamison Taillon before pitching an inning after his second TJS, so we know he isn’t shy from pulling a trigger on a deal that seems far-fetched. With that in mind, I wouldn’t take Steven Brault or Chad Kuhl off the poker table here. And, there’s a lot of Rule 5 guys they need to make decisions on before November 19th. I think it’s possible we could see one or two of them moved in a deal. It should be a busy Winter Meetings so grab the popcorn and a cold beer. It should be fun to watch.

Next up – A closer look at Bryan Reynolds trade value.