Justin Verno – We are a week closer to the Winter Meetings, Joe!

In this installment we will be taking a look at David Bednar’s trade value. I have to admit, I’ve tried to start this a few times and I just couldn’t get it going, as I just can’t make sense of moving Bednar right now for a few reasons:

1- There’s just too much control here to move and the cost in prospects would be prohibitive.

2-Bednar looks like a great late inning reliever and they don’t grow on trees.

3-At one point you have to add to the roster, not subtract. I feel we are at that point.

But we find ourselves, once again, having to address a player’s trade value due to his name coming up at the trade deadline. I have to think if his name came up in July that we will surely hear a rumor or three attached to him in December.

Joe Boyd – It doesn’t hurt that Bednar had a fantastic season, either.  I mean, just look at these percentiles from BaseballSavant: 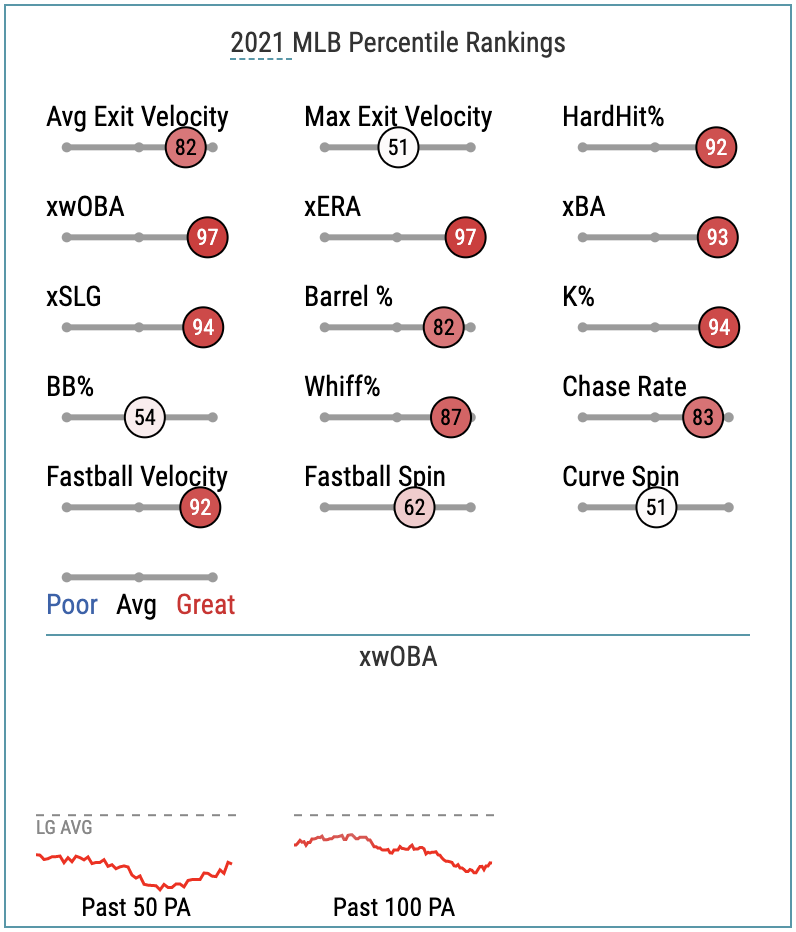 That’s just beautiful.  And couple that with the assumption that Pittsburgh is a fire sale, and you can see why pundits try to create trade rumors here.  But the Pirates are not just churning assets, it would be extremely unlikely to move a piece that came over just last offseason in the Musgrove deal.

On the other side of the coin, some may say that relievers are fungible, the running backs of baseball.  Or they may say that they are volatile and inconsistent.  So maybe you do make a deal for Bednar and strike while the iron is hot?  Let’s take a glance at the value for David and we’ll go from there.

ZiPS is in the process of getting updated for the upcoming season, so we will have to estimate a bit on his value.  I’m sure you could push the projection up to something like 1.5-2 WAR if you are extremely bullish on Bednar, and you can use STEAMER’s projection of 0.7 WAR if you think that Bednar regresses.  I’m going to use 1.1 WAR (a very slight regression) to hedge my bets in the middle.  He is a free agent in 2027, so that’s 5 years of service remaining.  Projecting out that value and including an age factor, you get almost exactly $38M in true value.  Then if you subtract his salary (he appears to be Super 2 eligible … if that’s still a thing in the new CBA) you get a surplus value of $23.5M.  This is the value that I plan to use to develop a trade package for Bednar.

Toronto is a well that I like to go back to just because we know that Cherington and Sanders know the system.  But for the first time (I think, I did zero research) I ask for a Major Leaguer in return for one of our players!

Tim Mayza – LHRP – ETA: NOW – SV $15.8M
Look, if you want one of our prospects that happens to be from Western PA, you’re going to have to send back a kid from Western PA! Mayza is 29, but look at these percentiles, again from Baseball Savant: 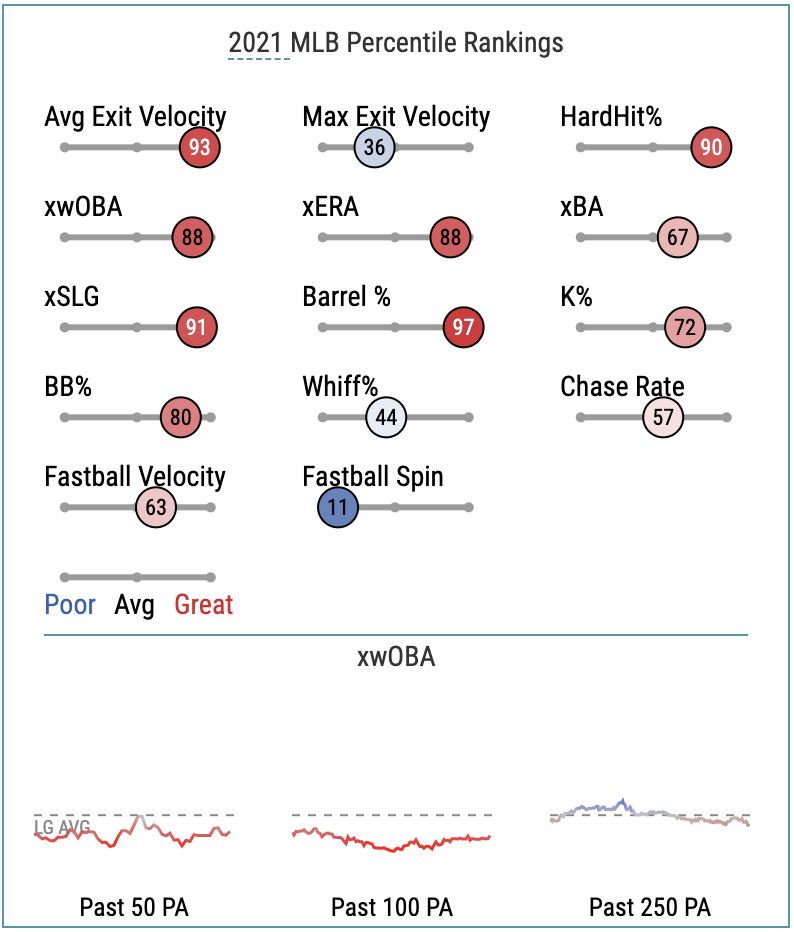 He is under control through 2025, so plenty of control and his ability to miss bats and avoid hard contact would be a great addition, especially from the left side.  Utilizing the same projection style that we do for our Buccos, Mayza still produces almost $16M in surplus value.

Yup, that Gunnar Hoglund that spurned the Pirates in 2018.  From Longenhagen, “Through 2021 Hoglund was arguably the most polished college arm in the class, sitting in the low-90s, while dotting a plus slider on the corner with remarkable consistency. Healthy Hoglund has the best command in this draft. His fastball’s tailing action garners looking strikes on the glove-side corner and sets up Hoglund’s changeup, which needs to develop.”

Hoglund is recovering from Tommy John, but should be close to returning to the mound if the Pirates were to make a deal like this.  Adding a polished arm like Hoglund would make it easier to move Bednar.

An interesting player that’s 30 years old and yet has prospect status.  Again, Longenhagen, “he has knockout backend bullpen stuff right now, and for a lot of prospects in this and other systems, that would be a great outcome. He’s prominently represented here, despite his age, because of that. It’s also worth noting a fourth option year has been imposed upon Merryweather due to his injury history, which isn’t great for him but certainly buoys his trade value a little bit because teams value roster flexibility.” Adding a player like Merryweather pushes the value to an acceptable level and adds another wildcard piece to the bullpen.  In this deal, we’ve traded a 26 year old with back of the bullpen stuff for a 29 year old lefty w/ control, and a 30 year old with back of the bullpen stuff… and a potential future #3 starter.

JV – David’s stuff looks like the real deal and someone you can run out there for years, and the peripherals certainly support that. This means that any deal Cherington takes needs to be an overpay. I can even see him asking for a 50 FV player back in any potential deal. But, we’re to offer realistic packages so, here’s mine.

JV – With news today that the Rays extended Wander Franco (are you paying attention, Nutting? Get a Reynolds and Hayes extension done, please.) it’s time the Rays went full steam ahead, and the BP let them down in the 2020 playoffs. I think adding a controlled late inning reliever is just what the doctor ordered.

The intriguing thing with JJ is his spin rates. In his first year, his FB spin rate was 2250(a solid number) and is now 2600 while his breaking ball rates jumped from 2050 to 2400. These numbers are per Fangraphs. The Fastball sat in the low 90’s. Now it sits 91-94 and as high as 96. The changeup is developing as well to an upper 80’s offering. The results aren’t there yet, but he has the look of a quality starter. Did I mention he’s just 20? SO there’s a lot of development left to play around with here and standing at 6’3” 186 lbs., he has the frame to add some velo.

An international signing Fangraphs notes, “He is a caliber of prospect commensurate with a mid-first round pick.”  There’s a lot of development here as he’s just 18, but this is the kind of talent teams hate to give up in a trade. See: Cruz, Oneil. Now, Carlos doesn’t have the frame nor am I drawing a direct comp to Cruz. But he’s raw, highly regarded, and the FV for power is certainly there, scoring out at an FV of 55 for both raw and game power.  He also projects to stay at SS with a solid arm(60 on the scale) and glove FV of 55 and speed(FV 55).

Wilcox was predicted to be a 1st rounder in 2021, but slid due to signability concerns stating he wanted to go back for his last year at Georgia. Got an over the slot deal, and here we are. Wilcox has the upside of good #2-3 starter and the floor of a reliever, making him a good gamble in this deal. The fastball is legit, grading out at an FV of 60 on the scale. Ranging from 93-97 and capable of reaching back to hit triple digits when needed. To compliment the FB is a slider and a changeup grading out at an FV of 60 and 55 respectively. To be a rotation piece, he needs to show the velo throughout his starts and the change up needs to develop. Standing at 6’3” and 230 lbs I think that’s a good bet. Like any other 6’5’ pitcher out there, his command needs work.

JB – Even as I was writing that trade package I was saying to myself, “I wouldn’t accept this deal.” And I don’t think Cherington would either.  As has been the underlying theme of these first few ‘Talkin’ Meetings’ pieces, Cherington can and absolutely should listen on every player on this major league club.  There’s no reason to say no right off the bat, but creating a package that would be acceptable for both sides makes things difficult, especially for talented young pieces.  So just like Reynolds and Stallings, a Bednar trade just does not make sense to me this offseason.

JV – Like Joe, I have the same feeling on the deal I built. I just don’t know if I’d accept the deal. If the Bucs were in the early phase of the rebuild, I am likely loving the deal. But does it make sense from where we sit today? At some point, every GM has to put a “target” date on the rebuild where they can say, “we should be winning this year.” They may not tell us this in those words. It’s more likely we notice this when they “add a piece,” whether it’s a free agent deal or a trade piece. We are quickly approaching that.  As funny as this may sound, it’s easier for me to envision a Bryan Reynlds trade than it is a David Bednar trade. If Seattle is willing to part ways with Julio Rodriguez OR Noelvi Marte and Emmerson Hancock, a Reynolds trade is possible and it could help the Bucs stay on their schedule. I just can’t see that in any Bednar trade, five years of Bednar is simply worth more right now.

Joe, there’s one other thought I’d love to throw your way. If Bednar keeps shoving, the projections are likely to inch up and it’s entirely possible they can keep him for 3-4 years and move him with 1-2 years left and get as good a package for him then as they could today. This is the final nail in the “trade Bednar” thought process to me. If a GM wants him today, I think BC really makes them ante up?

JB – Sure, the sweet spot to trade a productive bullpen arm would be with 2 years of control left, so maybe he becomes a 2+ WAR reliever and you can cash in on him then.  The Pirates obviously see the value in him as they had just traded for him.  They have reaped a bit of value already, they are not dying to move such a good, promising player.