I’m back again with the second rendition of MLB Draft COMPS scores.  I’m going to plagiarize Joe Boyd from 2021 so you get the background on how this thing works:

“I wanted to utilize the data from Fangraphs, and try to make these draft prospects a bit more relatable.  My plan? Utilize ‘Sim Scores’ to make player comparisons.  Sim Scores are just a way of comparing a player to a bunch of other players via several inputs, and in my case those are their biographical measurements (height, weight, throwing hand, Right / Left / Switch hitter) and their tools from Fangraphs. Please note that, like baseball, baseball blogging is also somewhat of a copycat league.  Part of my inspiration came from Shaun Newkirk who did this type of project last season. And I’ve created Sim Scores in the data software tool, R, but it was not exactly visually appealing.  Instead, I am utilizing / improving upon a spreadsheet from HW Linwood at CheckSwings.com (now defunct).  I reached out to him/her, but no luck.  I’m writing this article for free, so HW, if you read this and want your cut, you can have 100% of my proceeds.  The original spreadsheet had Fangraphs top 400 prospects from the 2018 season, and only was available for hitters.  I have expanded the depth of prospects to 2017-2021 and I have developed a Pitcher COMPS spreadsheet as well.  And without burying the lede too deeply here, I wanted to provide these spreadsheets to you:

Without getting too into the weeds here, a Z-Score will look at a featured draft player’s input (Height or Hit Tool, for example) and compare it to the pool of players (2800+ for both Hitters and Pitchers) and assign each member of the pool a number based on how far away from the featured player’s input.  The further away from the prospect, the less they are alike.  The Sim Score is simply a sum of all the Z-Scores, so when we are looking for a player most similar to the featured draft player, a lower score is better (think a 2.00-5.00 Sim Score).”

In 2022, the Pirates will select fourth overall, so I wanted to highlight the six players that are currently in contention for the pick and look at their most similar “famous” prospect (allow me to use my discretion here!) and the nearest Pirates prospect (I may sneak some cherry picking in here too) as I believe the readers here will easily be able to make that type of connection.  And before we begin, have fun with this.  If you don’t agree… blame Longenhagen or HW!

My favorite part about this project is that I do not believe Longenhagen knows that I do this, so please don’t tell him.  Having his independent grades on these players, without influence, allows for genuine COMPS for these players.

Notable COMP: Ronny Mauricio – NYM – 2022 (Sim Score: 4.29) – Not a bad COMP to start off with, as Mauricio is the current 47th best prospect in the sport.  Both Lee and Mauricio are switch-hitting shortstops with FV tools that include plus power and plus-plus arms.  Lee has been linked to the Pirates more often than note in my perusal of mocks due to the advanced bat at the college level. If he compares this well to a player ready to debut in 2023, you can assume he’ll fly through the system.

Pirates COMP: Rodolfo Castro – 2020 (3.76) – I’m still a fan of Castro and love his versatility.  ZiPS sees him as a 1.2-WAR player as soon as 2023, so that’s some solid value from a potential bench/utility piece.  I would probably consider this a floor for someone like Lee, but that’s not a bad range for the selection: Bench Utility  – Top 50 prospect in baseball. 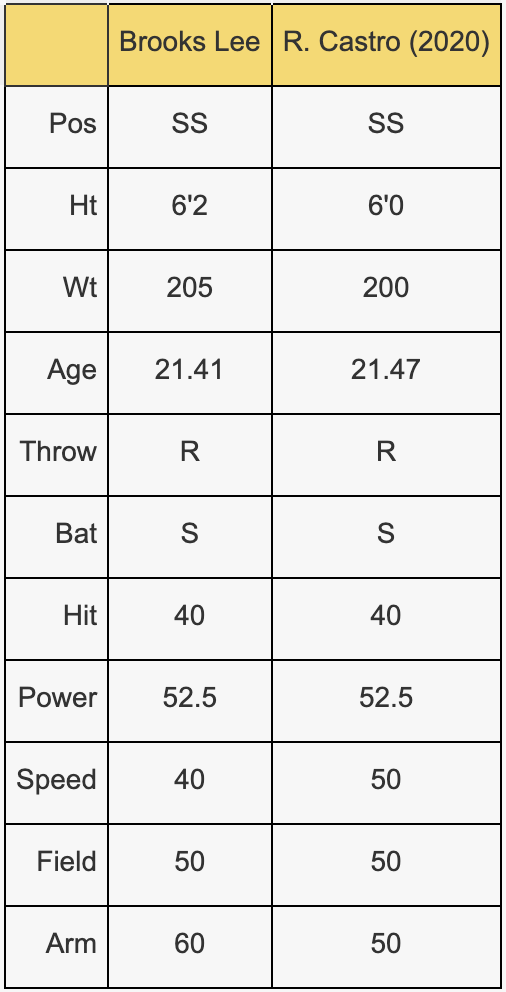 Alright, here’s a guy that really intrigues me, and would be an interesting choice, but apparently there’s some smoke on this connection.  According to the Athletic, the Pirates/Collier connection is actually real, due to his performance at the Cape Cod League.  Keep in mind, he left high school as a sophomore to head to Chipola College to further his development, so he’s really young, and won’t turn 18 until November!

Notable COMP: Fernando Tatis, Jr. – SDP – 2017 (5.23) – Are you kidding me!? The Pirates can grab a Fernando Tatis at pick 4!? Well, probably not likely, and probably mostly to do with the age (Tatis was just 17 in 2017), but Collier does have loud tools.  There are other similarities here too, as Collier’s father is former Major Leaguer, Lou Collier.  With the potential of a 50-hit tool and serious power to go along with a 70-arm, Collier might be worth the risk here.  Long ways away from PNC Park, but if he can develop to be 85% of Tatis, Jr., he’s going to be a problem!

Pirates COMP: Maikol Escotto – 2020 (7.89) – This comp is from when Escotto was in the Yankees Farm, but similar tools, albeit a bit quieter, Escotto has yet to make that leap we were hoping for, and that could be the fate of a Collier, especially when you have such lofty projections at such a young age. 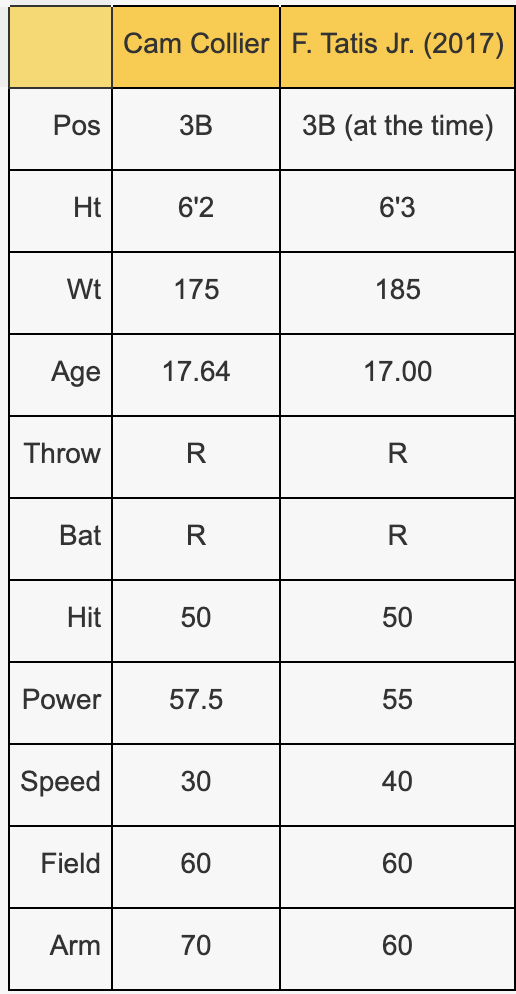 Notable COMP: Rafael Devers – BOS – 2017 (7.80) – The heavy hitters for these comps are pretty impressive! Granted, a 7.80 SIM Score isn’t all that similar, but it’s still a lofty comparison.  Johnson is considered to have the best hit tool in this class (55-grade), so if all goes well, Johnson could be in the MVP-caliber range like Devers.

Pirates COMP: Nick Gonzales – 2020 (7.89) – Gonzales was also a 2B carried by his bat.  He was a college bat, so you can already tell that Johnson is advanced for his age.  Gonzales has dropped from a 60-grade down to a 45-grade hit tool, so we’ll hope that Johnson heads in the other direction. 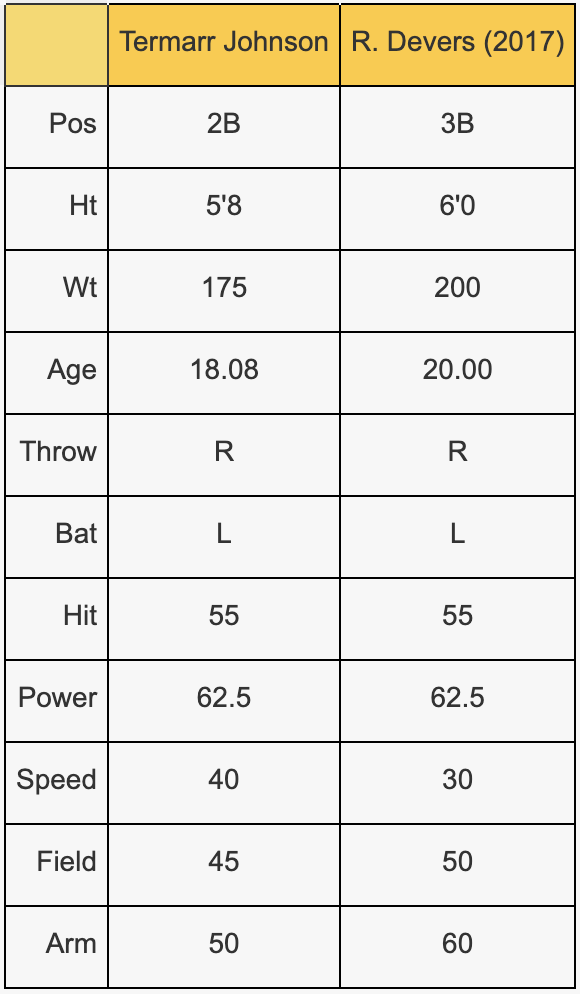 Notable COMP: Bobby Witt, Jr. – 2020 (4.14) – I think we’re at the point where Jones (son of Andruw Jones, for those unaware) has gravitated to being near consensus #1 overall prospect.  Baltimore could do something similar to what Pittsburgh did last year and cut a deal with a college bat (like Brooks Lee), and you could technically see Jones fall.  But, I wouldn’t expect him to get to 1.04, but I wanted to cover my bases nonetheless.  Here we have a comp to Bobby Witt who went #2 overall in 2019 is a near 5-Tool player.  Both Jones and Witt only have a minor question mark on their hit tool (45-grade), everything else looks fantastic.

Pirates COMP: Maikol Escotto – 2022 (5.74) – Another Escotto comp!  We’re looking at ‘comparable’ players here in that both have similar bats and arms.  But Jones is a much more well-rounded player and also happens to be 2 years younger.  So let’s not expect Escotto to grow to be a top prospect, and I also don’t think we can expect Jones to fall off because the speed and defense can carry him even if that bat doesn’t quite develop. 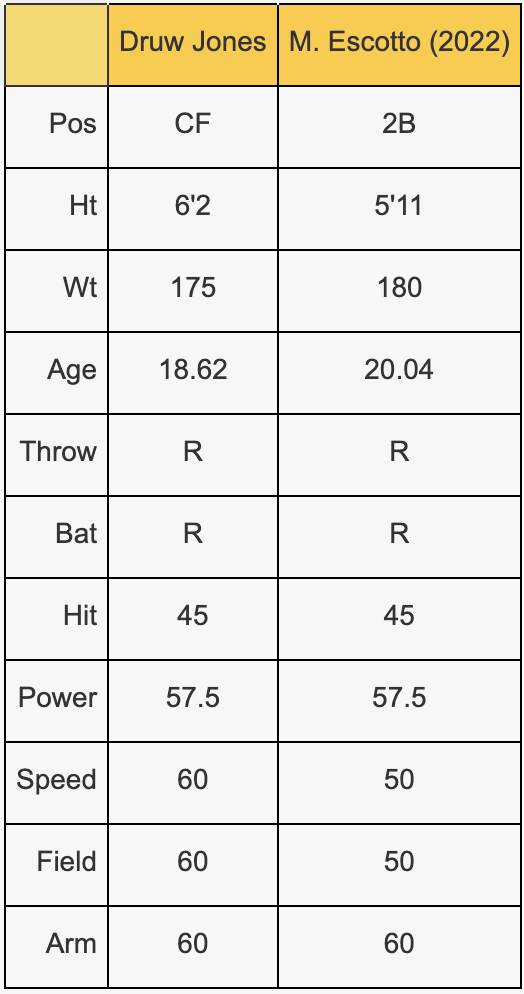 Notable COMP: Heliot Ramos – SFG – 2018 (7.27) – It’s fun to tie in our recent Talkin’ Trades pieces whenever possible!  I touched on Ramos as a part of the Bednar deal because he’s been on my radar for quite some time.  It’s not hard to see the comparison between Green and Ramos as they both just ooze potential. Ramos has lost a bit of shine on his prospect star, and could serve as a reminder of what can happen to young high schoolers who are in the spotlight for so long.

Pirates COMP: Lonnie White, Jr. – 2022 (10.29) – I could’ve gone with Escotto AGAIN, but I figured I’d mix it up a bit.  When I see players align with the same prospects in the Pirates’ system, I start to wonder if they are of a similar profile that Pittsburgh looks for.  Now Green, son of former Steeler Eric Green, has plenty of swing/miss in his profile, but the dude has been compared to BO JACKSON.  He’s a freak that is fun to dream upon.  Can you envision Green, rocking his dad’s #86, mashing dingers in PNC Park?  I sure can. 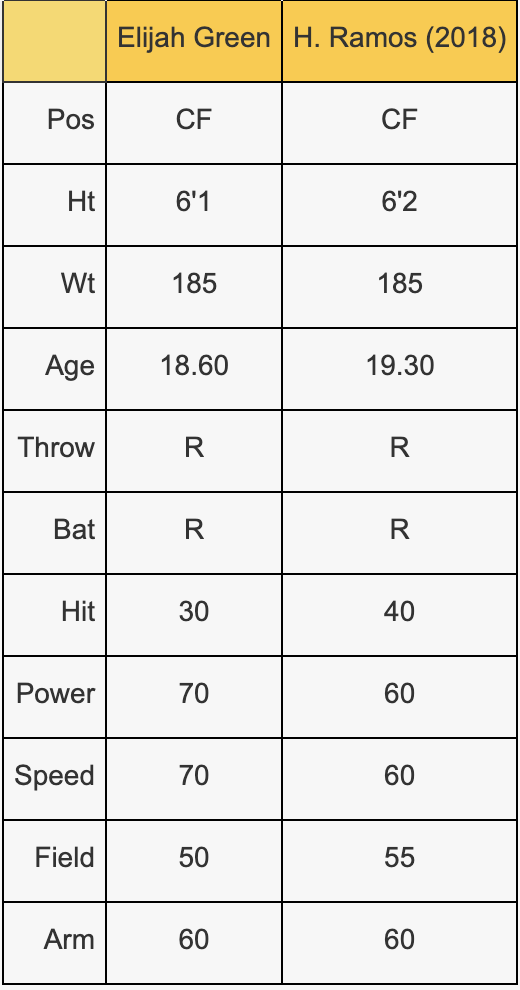 Notable COMP: Alek Manoah – TOR –  2020 (3.24) – This is the same comp from last year, so I’ll plagiarize once again, “I actually love this comp. Manoah tips the scales at 250+ so you get those big, intimidating vibes that Rocker also brings to the mound. Both are given an overall FV of 45+ out of the draft, and both sit mid-90s and touch 98. It took Manoah just about two years to make his Major League debut, and maybe Rocker could be on a similar track.” 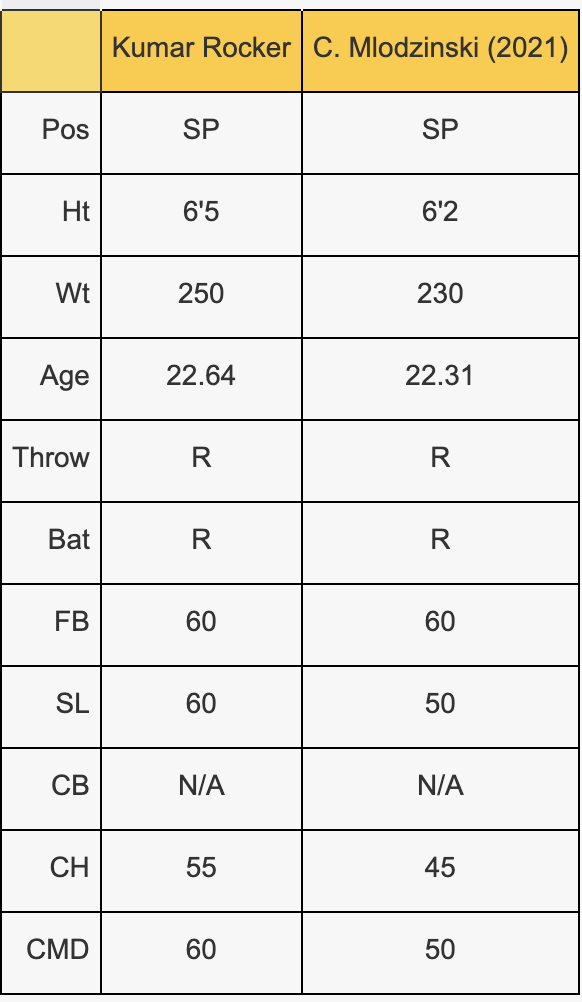 So to conclude, I am certainly leaning towards either Lee or Collier at this juncture.  Lee looks like a guy that could fly through the system and be in Pittsburgh about the same time as Davis, so you have to love that timeline.  Collier just has so much youth and potential that you can just dream on him being a superstar.  He might not be ready when the competitive window opens, but, just imagine the reinforcements/extension of the window if he hits.  If the Pirates can develop a Tatis-Lite, it literally does not matter where he plays, sign me up for that.  I’ve discussed before that roster construction is my favorite part of sports, so aligning a tidal wave of talent to descend on the North Shore all at the same time is the ultimate goal, but if you can create multiple waves, that’s the golden ticket.

As things progress or if Fangraphs updates their rankings/scouting, I can revisit this exercise.  Or if Pittsburgh chooses someone not on this list, we can look at those comps in detail, but this is just a fun opportunity to make some connections between players you have seen or know (former/current prospects) and the players in the draft that you may not.  So feel free to mess around and see which COMPS you like the best!