Joe Boyd- Justin, I think the folks are sick of us drumming up trades for the fan favorites, and the hometown heroes.  So this week I thought we’d talk Ke’Bryan Hay.. I’m just kidding.  Let’s talk about the man that’s been lost in the shuffle, Ben Gamel.  Prior to going on the IL on 5/29, he was slashing .257/.350/.386 while providing solid defense.  But since being on the shelf, Gamel has ushered in the youth movement seeing Jack Suwinski, Travis Swaggerty, Bligh Madris, Cal Mitchell, and Tucupita Marcano all take reps in the outfield.  So as much as you’d like to see a veteran stabilizing presence, I think we can agree that Gamel can best help this team by moving to a contender for a piece that can help bolster the youth movement.

Justin Verno-–Don’t scare me like that, Joe!  Yeah, I think we lolly gagged enough. Let’s get to  the players that are more likely to call a new city home before the baseball season is over. (You digging the Bull Durham reference?)

There is a value in having a vet presence, I think we can all agree on that. But as we discussed last week on the Bednar values, roster construction needs to be a thing moving forward and the front office can get the ball rolling with some of these smaller deals.

One thing I’d like to toss out there on these trades is I’ve had a lot of people tell me that keeping some of these guys over adding a prospect that grades out as a 45 or a 40+ or even a 35+ if that’s all the Bucs can get is a better plan than moving them. I understand people’s frustrations with moving these vets and all, but a lot of these mid level prospects pan out. Some develop and go on to bigger things while others become solid role players. Anyone want to guess what Bryan Reynolds’ scouting grade was? It was 45. How about  Tony Watson? He didn’t even make the Bucs top 30 list on any of the major publications. The point? Have fun with it as you never know how some of these guys will develop.

JB – For a value, Gamel’s a bit easier as he is in his final year and his salary established (no arbitration estimates!). ZiPS has Gamel’s WAR projection at 0.5 Wins over the remainder of the 2022 season, so his value is as follows: 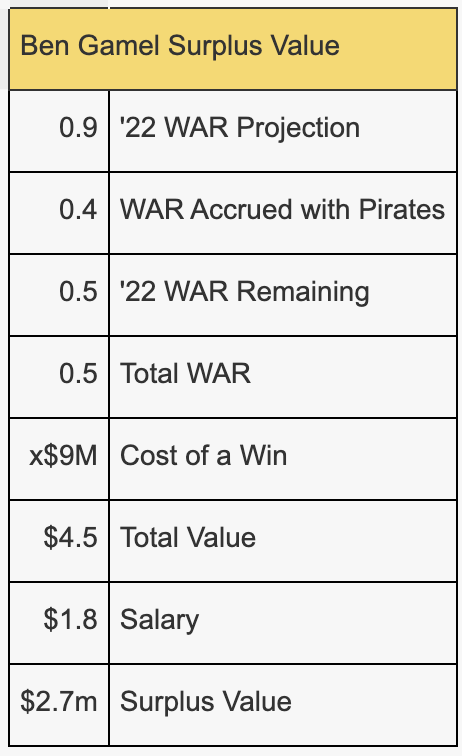 So the returns for Gamel will be firmly in the lottery ticket/depth categories. Still, not bad for a DFA claim.

JV – While 2.7M doesn’t seem like a lot, there’s still some value to be found here but it needs to be mined a little. We aren’t looking to break the bank here, just find some hidden gems.

Sands popped for me based on his 3000 RPMs / 70-grade curveball.  If you look at Longenhagen’s write-up: “Sands’ money pitch is his incredible curveball, a 77-82 mph offering with an incredible amount of two-planed, sweeping action. Sands will try to run his 91-95 mph fastball past hitters at the letters, which he’s gotten better at doing since college due to a slight shift in his delivery that altered his fastball angle. He throws very few changeups and that pitch is still shy of average. That, plus Sands’ lack of innings, has us projecting him as a multi-inning relief stopper, a role we value in this FV tier.”

To me, that reads a lot like a Chris Stratton-type reliever that can wear many hats while bringing value in a multitude of situations.  I am on record as loving Stratton, so if the Bucs can find a younger clone, I’m all for it.  For reference, Stratton’s 3148-RPM curve is #2 in all of baseball, Sands’ would slot him at #7.  Not to make too much of a leap here, because I do see Sands as a long reliever, but Longenhagen grades out Sands very similarly to our own Michael Burrows.

JV – I’m not exactly breaking ground here, but Cherington has not exactly built a good bullpen so adding a guy that helps immediately is a solid way to go, but I’m going  the opposite way of Joe with my proposal. My trade partner, the San Francisco Giants.

The Giants have a need and they won’t have to break the bank for Gamel, so that leaves them in a good position to make other moves to put it together down the stretch.

Fangraphs describes Mercedes as loose and athletic. Standing at 6’3” and 162 LBs the 19 year old has plenty of projection left and adding velo to his fastball is a real possibility. The thing is he already sits 94-97 MPH and has touched 98. His arm slot is lower but still gets great action.

His athleticism and frame suggest he should project as a starter, though he has a violent delivery that  leads to his control issues, CV 20, showing that the bullpen  could be his future. Add a slider(FV 50) and a change up(60 FV) to that 60 FV FB and you have the makings of a promising arm.

I think adding a 35+ to this could be a possibility, but I’d be happy adding Mercedes to the system.

JB – My trade is a trade from a position of strength, left-handed outfielder, to bolster a position of need, pitcher.  This deal gives the Pirates 6 years of control of a player that could develop into a Chris Stratton type role player on a future contender.  That’s a type of deal you want to see this club make.  Bednar was a “throw-in” on the Musgrove deal and he turned out to be a rock star that anchors the bullpen, and this deal gets the Buccos a reliever that can handle a multitude of situations and provides Shelton flexibility.  Not a bad return for Gamel.

JV – The Pirates have so many young OF clogging up the upper parts of the system moving Gamel is not just doable, it’s almost a crime if they don’t. And we absolutely understand the return won’t be sexy, but perhaps with a little patience we could find some treasure after walking the plank.

Next week Joe and I will be tackling another rental, but I get the feeling that this one will get a little more push back. I hope you’re ready to take on Jose Quintana and his trade value!