Justin Verno – Another week gone, another week closer to the Trade Deadline. With Ben Gamel in the rearview mirror, Joe and I take on a much more controversial trade candidate in one Jose Quintana. When the Pirates signed Jose in the off-season, it was well received by the fan base, and rightly so. Jose is a LH starter with a solid past and frankly, he has pitched better than most of us thought he would. This has had two effects.  The first thing it did was raise his trade value. The second thing? It has Pirate fans wanting to keep him.

And I get it. He has become a steady influence and a quality start machine. Hand him the ball and relax; he’s going to give us a shot to win the game. My biggest issue with the “keep him” mentality is, if he continues to pitch like this he likely pitches his way out of the Pirates price range. If he regresses, there’s likely not as big a reason to keep him. And Joe, I have to think he regresses a little.

Joe Boyd – Yea, an aging veteran that finds the fountain of youth typically doesn’t keep it for 2 full seasons.  I could certainly see the benefits of keeping Quintana.  You provide a stabilizing/veteran presence, he’s a lefty, he could be your stopper or at least a solid #5.  But he likely won’t maintain this trajectory, and besides, the best case scenario for a rental is that he produces and you can flip him for a piece that will help you for 6+ years, not 1-2, right? So let’s get into the value:

Like Gamel, Quintana’s easy because there is very little projection (no arb years, no out years), so he’s already at 1.3 WAR this season, and ZiPS has him accounting for 0.7 WAR for the remainder of the season.  Not bad for a reclamation project!  His salary is $2.0M so the subtraction aspect of this value is easy too. 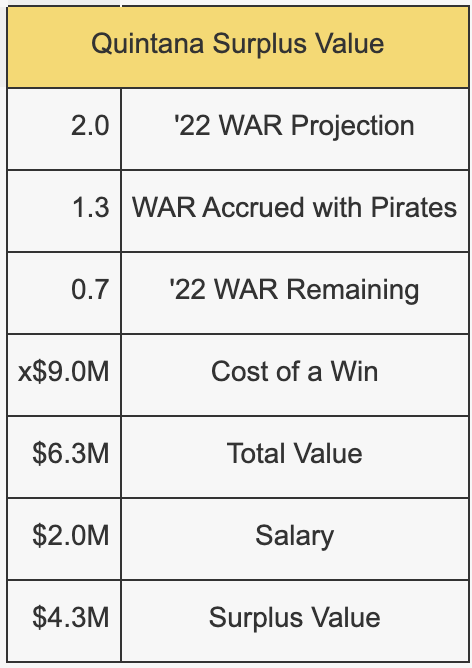 JV – And Joe, we’ve been here before with LH rentals having value despite being rentals. Last year, we touched on the Mike Minor return and now we have the Tyler Anderson return we can use as a script.

The main piece the Bucs got back for Ty Anderson is 18 year old Joaquin Tejada, currently a 40 FV kid  pitching down in the CPX league. His control is still an issue (what 18 year old doesn’t share that trait?) but he’s getting outs when he needs them with an ERA of 1.59 and a solid K rate of 28.9%. He’s been a tad lucky, FIP is  4.08 but all in all he was excellent value for a few months of Anderson.

It’s not an eye popping return, but if the Bucs ever want to turn the corner they need to identify these kids, add them, develop them, and sit back and stack the wins. (A guy can dream, right?) After all, we just never know what prospects will and won’t develop.

Toronto is in a battle for the Wildcard and they probably want to beef up the rotation.  They have Gausman and Manoah playing lights out, but they cannot be happy with the returns from Jose Berrios and the lefty in their rotation, Yusei Kikuchi.  So why not add a low cost option from old friends Ben Cherington and Steve Sanders?  Do we goto the low-hanging fruit of Toronto often? You bet!  But it’s such a good pairing considering that Toronto is in their window and willing to deal future assets.  So what did the Pirates get for their 1-year rental pitcher?

Justin has mentioned Van Eyk previously so I don’t have to go into too much detail, but a player that can “(at his best) sit 92-95 and touch 97 with a four-seamer, (and) one without the kind of carry teams covet these days. His 12-6 curve has dastardly bend and a data-friendly shape,” according to Eric Longenhagen.  There is concern that he’s wildly erratic from outing-to-outing or even inning-to-inning, but perhaps there’s something there that the Pirates can hone in on to create a more consistent approach?

In my first 3-time returning trade piece (!!) Kloffenstein is a player that I want to get to Pittsburgh.  He has absolutely not put it together in Toronto and perhaps a change of scenery would be the wake up call he needs?  He’s a behemoth, standing 6’5 and weighing 243 lbs, so you would assume he’s a high velocity guy.  However, he has not exactly developed that in his time in the Toronto system.  Getting Kloffenstein as a ‘throw in’ could potentially provide the drive that he needs to turn things around.

JV –Love CJ! That would be a phenomenal return and well worth moving the quality start machine.

Speaking of the quality start machine, Quintana just polished off a 5IP  1 ER with 7 K’s gem off the NY Yankees, not much will help a rental’s trade value more than showing up the Yankees.

You know who else noticed this start? The Red Sox and Blue Jays. Two teams chasing the Yankees in the division and each other in the wild card race. Can you say bidding war? OK, Joe you tabbed the Blue Jays so it looks like I get the Red Sox.

I’ve used Blaze before and you can find what I wrote about him from last year in the link. There were strikeout concerns with Blaze going into the draft, but the work he’s done on his swing has eased those concerns a tad. Blaze has his K rate sitting  at 15.7% on the season, a solid number for any hitter, but especially a power bat. His slash line looks solid as well, coming in at 301/373/485.

The downward stroke hasn’t been fixed but has taken some great strides and the power reflects that as Blaze has 32 extra base hits good for an OPS of .858, prying him off Chaim Blooms hands looked like a hard task last year and with the progress he’s made it’s now a Herculean task, but that LH starter just took the Yanks to the shed, give it up Bloom!

Groome has lost a lot of his luster as a top prospect as his CB and FB aren’t what they were before his TJS. But the slider looks solid and the velo has been clicking back to the low to mid 90’s (sits 92-94). His K rate is solid enough to take a flier on here and Groome should be good for a call up at some point this year. Swapping a LH for LH would be a solid W for Cherington here especially if Groome is paired with a Blaze Jordan.

JB – To conclude, this is the dream return for a rental.  You’re not likely to find teams willing to admit the mistake of not signing a guy for free and then 4 months later hand over a bevy of prospects to get him.  So in Quintana, the Pirates flip him for some prospects that will potentially provide value during their window of contention.  And with that, on to the next one.  Where to next, JV?
JV-An interesting note here, Joe: as I was finishing this up, Jon Morosi Tweeted this: 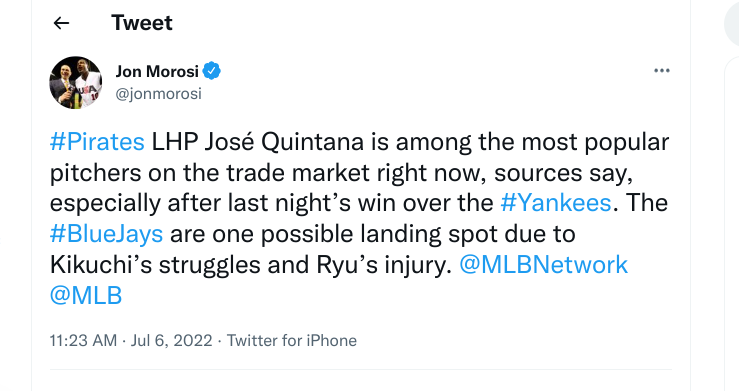 MLB Trade Rumors followed up with this tidbit-https://www.mlbtraderumors.com/2022/07/pirates-trade-rumors-jose-quintana.html?utm_source=dlvr.it&utm_medium=twitter

While Morosi mentions that the Blue Jays could be of interest, MLBTR points out that every contender could use a Jose Quintana. Let’s hope Cherington can leverage this into the optimum return!

What’s next? Well Joe we are running out of names here that the Bucs could part with. Stratton? Newman? Vogelbach? I think we can knock out all 3 next week!