Justin Verno- OK Joe, here we are. It’s just a few short days before The Trade Deadline. We’ve talked about which Buccos could be traded away. We’ve gone over what types of packages we could get in return. We’ve even suggested that the Pirates could actually add and gave some examples. The only thing left is to chat about some of the specific rumors we’ve heard about these Bucs!

Before we get going there we do have a trade to go over. Since our last piece a few different insiders, Andy Martino and a blog called Metsmerized (they actually had it first) reported that the Mets were in on Vogelbach. A few days later the deal was done. Let’s start by briefly touching on that deal and how Ben Cherington did.

Joe Boyd – A few weeks ago, we touched on Vogelbach’s value, noting that it was a bit inflated for a bat-only player.  I suggested a 45-FV pitcher in the $4-6M range and JV suggested (to the Mets!) for a position player 45-FV which is a $6M valuation.  So what’d the Buccos get with Reliever Colin Holderman? For starters, he’s 6’7 with a huge fastball, so that’s intimidating.  He actually changed his delivery and spiked from 92-mph up to 98-mph and is somewhat of a late bloomer making his debut at 26 years old.  Longenhagen believes him to be the “third banana on a contending team” and has the ability to pitch high leverage innings.  He’s a 40+ FV, and that’s a $3M surplus value.  Oddly enough, no ZiPS for him as of yet.. So we’ll stick with that valuation.

JV – And it’s easy to say the Bucs got less than we predicted,  there is however an asterisk that does need to be mentioned, in his very brief stint in the MLB he has looked the part for sure. In his 17.2 innings pitched the results have been terrific.

Even though this is less than the suggested SV I still like the return.

Moving on Joe, as of writing this the rumor mill had been pretty hush. Not that we haven’t heard any, but most had not been pointing in the Bucs direction until Tuesday evening when things started to open up a bit. Here’s what we’ve heard so far- 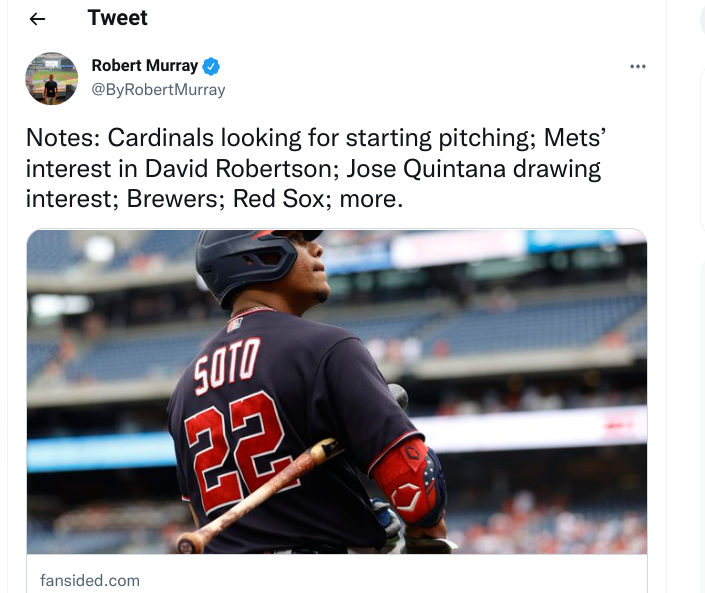 Joe, there are few more out there but most seem to say the same thing.- A lot of interest in Quintana.

-A lot of interest in Reynolds.

-Unlikely to move Bednar or Reynolds.

Am I missing anything there? Or has this been a market dominated by Soto news?

JB – No, I think you’re right.  Soto will probably be creating the logjam. So until that domino falls, we might be stuck in purgatory.

One thought on “Two Guys Talkin’ Trades – Rerack it!”